Part of Slice of Life by Two Writing Teachers March Slice a Day Challenge!
I’m slicing every day this month. Thanks for stopping by. 🙂

The scene: A cabin nestled in the mountains, hours past sunset.

The facts: It was dark, it was late. We had enjoyed dinner on the screened-in deck and enjoyed the mystery of the noise we heard somewhere below the deck,  in the dark forest.  A few of us had spent some time looking into the woods to try to see what was making the noise. The kids were convinced it was a bear. I said, “It’s probably a rabbit. Stop worrying.”

There was one thing we had left in the van: Mr. Thought’s BiPAP machine.

Also, the dog had to pee.

Mr. Thought and I decide that we should go outside together. We had read the binder about the cabin — be watchful for wildlife!

We walk out with the dog and are about to walk up to open the sliding side doors when we see something in front of the van.

We back back into the house before Finn notices, and we tell the kids to be quiet. We turn off all of the lights in the kitchen and look out the window.

“What is that?” we ask each other as we stare out the window.

The kids go berserk.  I mean, there is the crowding of the window, the loud shushing of others, the crying.

H says, “No. That’s just a rock! Look at the pictures we took before our walk!”

So we look at the pictures. But there only seems to be the wooden slab. No big rock.

Plus, it is furry. And breathing. And is that an eye? It is so hard to see out the window! 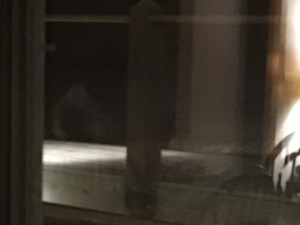 Should we beep the van to make it move? But then we won’t know where it goes. Should we shine a flashlight at it? Is it sleeping? Should we knock on the window?

“Wait,” one of the kids says. Is this because I didn’t pick up my apple core?

Earlier, on our walk, we had put the apple core on the ground in front of our van – meaning to pick it up on the way back inside. But then we had forgotten.

I text my parents. 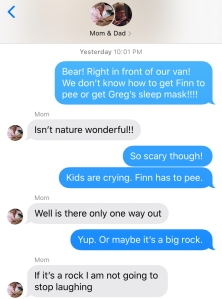 Mr. Thought devises a plan. He’ll go out the side porch to secure a door that is out there. This way, he can get a closer look – with screen door protection. I’ll stand by the window to get his thumbs down (It’s a bear) or thumbs up (It’s a rock!) and then we will know for sure.

The children do not like this plan. They can only think of bear attacks and death.

“Daddy. If you go out there and get killed by a bear, I’m going to be so mad at you!”

At some point, one of them googles what to do when you face a bear. They start reading us directions like “speak calmly, back away, do not run…”

We tell the kids to chill. Or maybe we yell at them to chill. I’m not saying it is our finest parenting moment. “Sit on the couch and let us figure this out, or go upstairs! We are the grown-ups!”

Then H remembers he has binoculars and runs upstairs to look from the window up there. The other kids follow.

But when L comes down and looks out the kitchen window again, she is unconvinced again.

We can see fur, and breathing, and is that an eye?

There’s only one way to find out. L sets her phone on the windowsill to capture the drama on video. Mr. Thought goes to the side porch. I watch as he slowly walks to the door that leads to the front.

A spotlight turns on from our movement, and it becomes obvious.

Mr. Thought goes to get his stuff, I text my parents, they laugh.

We are so relieved – not only is it not a bear but now we have a story to go with the time our cat was missing right at the same time we had a mysterious large critter roaming our bedroom. . .

6 thoughts on “#sol20 March 9 A Slice of Mountain Mystery”

Please note that these are my ideas, views and opinions. I work with so many spectacular teachers, counselors, administrators, students, families... and amazingly enough we don't always agree! The opinions I express here do not necessarily reflect those of my employer. They also don't necessarily reflect the opinions I'll have in the future. Like the sticker I had up in my room as a teenager: "If you can't change your mind, are you sure you still have one?" - Unknown.
Self-healing

Trying to Find Some Normalcy in The New Abnormal

reflections from a teacher and mom of two toddlers...